I see this question coming up more and more often and my answer, as a real-world prepper, is absolutely not. But it got me to thinking, are there really preppers or survivalists that secretly wish that the SHTF so they can say, “I told you so?” There is a fine line between enjoying survival fiction or discussing a world without law with your buddies over a campfire and an actual collapse. But what would it really be like? I don’t think the majority of preppers really want to know.

What Prepping Should Be

When the word “prepper” is thrown out there, a lot of folks think of the show Doomsday Preppers. The fact is, most preppers are not buying old missile silos and converting them to bunkers. A real prepper is preparing for a situation that could directly affect them. Something personal. Local. Preppers have common sense, their frugal, handy and practical. Read our short article on what I believe a real prepper is.

What Type of SHTF Situation are Preppers Secretly Wanting to Happen?

When this question is asked, I think of the worst-case scenario. Those disasters or events that would most likely cause a total collapse of society such as:

What Would Happen in a Total Collapse of Society?

This is a hard question to answer because it could be different depending on where you live but you can bet no matter where you are, it will be hell. In an article from PersonalLiberty.com, the storyteller recalls his time in Bosnia. Bosnia went through a major SHTF situation in the early and mid-nineties. A couple of paragraphs really stood out as to how quickly things will go south. Here is an excerpt from the article:

After a month or two, gangs started operating, destroying everything. Hospitals, for example, turned into slaughterhouses. There was no more police. About 80 percent of the hospital staff were gone. I got lucky. My family at the time was fairly large (15 people in a large house, six pistols, three AKs), and we survived (most of us, at least).

The Americans dropped MREs every 10 days to help blockaded cities. This was never enough. Some — very few — had gardens. It took three months for the first rumors to spread of men dying from hunger and cold. We removed all the doors, the window frames from abandoned houses, ripped up the floors, and burned the furniture for heat. Many died from diseases, especially from the water (two from my own family). We drank mostly rainwater, ate pigeons and even rats.

Money soon became worthless. We returned to an exchange. For a tin can of tushonka (think Soviet spam), you could have a woman. (It is hard to speak of it, but it is true.) Most of the women who sold themselves were desperate mothers.

Arms, ammunition, candles, lighters, antibiotics, gasoline, batteries, and food. We fought for these things like animals. In these situations, it all changes. Men become monsters. It was disgusting.

Things Could Get Really Bad in The United States

If there is a complete collapse of society in the United States, I believe it will happen fairly quickly. No matter what the reason, it will be something that no one could predict. We, as a nation, have been so well insulated against these types of disasters, that for most people, imminent failure will be difficult for us to accept.

One of the most important aspects of a civil society that will disappear in a complete collapse is trust. No one will be able to trust any institution or person especially from any sort of authority. America is already an “every man for themselves” type of society, expect that to intensify drastically. After all, the lack of trust and starvation is what caused the collapse of many societies.

We as a Nation Will be Vulnerable in a Collapse 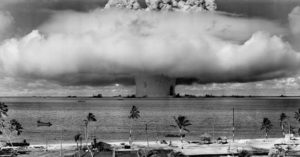 Certain countries may capitalize on the situation and invade while we are at our weakest. I don’t trust Russia or China and many other countries and believe they would do whatever it takes to get what they want. I am not sure why anyone would wish for this to happen, I know it is a fantasy, but we should all be Patriots till the end. Wishful thinking, huh?

We Will See the Rise Of “Sub Societies”, Gangs and Cults

If there is no law or way to enforce the law, gangs will become rampant. They will be ruthless and traveling anywhere could be life-threatening. People will kill over a can of soup and if anyone gets wind that you have a stock of food, you are going to have to defend it with your life.

For a lot of us, it isn’t just us. We have families and the thought of someone hurting our family doesn’t sit well with us. But the merciless don’t care about our families or our property. They will do whatever it takes to get what they want, anything.

The gangs that form will be the worst of the worst. The leaders will know how to use their follower’s weakness to get what they want. They will threaten brutality if they are betrayed while keeping their followers fed and secured to keep them loyal.

But Isn’t it About Time for a Societal Reset?

For me, it’s simple, no collapse of society is worth eliminating those we disagree with, no matter what. Yes, we despise the complainers, the entitled, the politicians, and those that shove their agendas in our face. But a total collapse won’t just take them down, we will go with them, eventually.

The fact is, I have no other advice that would solve the current problems except, prepare the best you can. Keep your family safe and be prepared to defend yourself when the time comes. Secretly or openly hoping for a collapse of society will not solve our problems but it will make our problems worse.

I urge my readers to prepare for possible local and personal disasters that are most likely to happen to you. Once you feel you are prepared for those situations, then you can move on to bigger more catastrophic disasters.

A Look at The Village Prepper’s Library of SHTF Books

We Are Coming to Your House When the SHTF

Safety Checklist and Tips for Traveling in Winter Weather Conditions